Best of luck to the 6th Class boys who will depart for Bath on the 20th annual 6th Class Rugby Tour at the exceptionally early time of 4.30am tomorrow morning! This morning the boys received their Tour Gear, a lot of which was sponsored by various parents in the class. Thank you to the parents for their generosity. The gear was presented by Scott Buckley and Aidan Brien (a former Prep School student) from the Senior Rugby Team.

A very hearty congratulations to this year’s Tour Captain, Louis Murphy, and Vice Captain, Evan Collins who were announced today. Well done also to Matthew Daly who designed this year’s Tour Jersey. The boys will look great as they play their matches in this fantastic jersey! A big thank you to Mr. Lynch for organising another tour and to Ms. McAdoo and Mr. Enright who will accompany him to chaperone the boys over the next few days. Wishing all a happy and safe trip. We look forward to hearing all about it after the Easter Holidays! 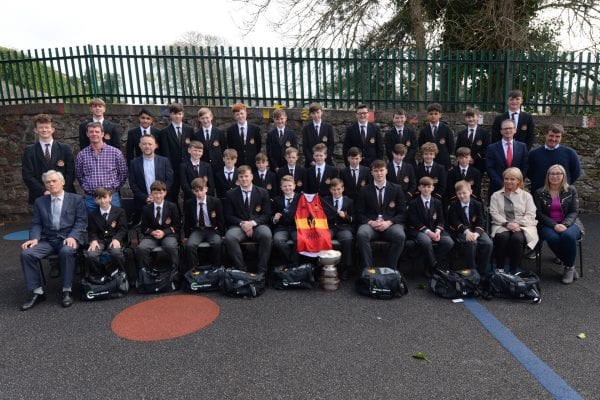